Capitalism can do better. Business can be more responsible. Short-term profit doesn’t have to be the singular focus of private enterprise.

This is what Corporate Knights believes. The long term matters, in our view. Our economy would be nothing without the social and environmental capital that lies at its foundation.

Yet markets are efficient at their core. Capitalism as an economic system works – for many. The problem is that our narrow definition of “wealth” and GDP has left just as many behind and distracted from the real goal: lasting prosperity for all.

It is this reality that attracted us to the efforts of B Lab, a non-profit organization based in Pennsylvania. B Lab has created a program that certifies qualified companies as B Corps, with the “B” standing for “Benefit.” To earn certification, B Corps must meet rigorous standards of social and environmental performance, accountability and transparency.

In 2012, Corporate Knights decided to join the chorus. This involved completing a “B Impact Assessment” survey, which measures a company’s environmental and social impact and applies a score out of 200. At least 80 points are required to qualify for certification – we scored 107. Not bad, but plenty of room for improvement. 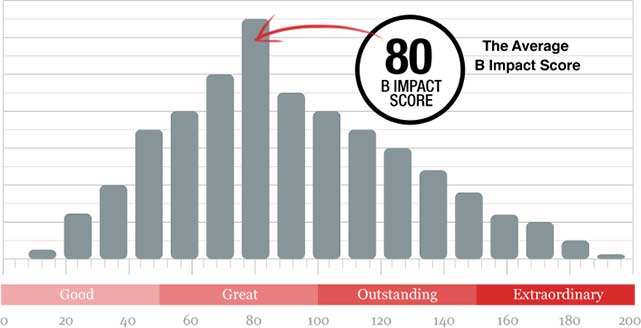 Next, we had to sign a term sheet and a declaration of independence, committing to “harness the power of public enterprise to create public benefit,” for all stakeholders, not just shareholders. We also agreed to subject our company to a one in five chance of being audited every two years.

The B Corp movement is growing. There are currently 1,257 B Corps in 38 countries, though most are based in the U.S. and Canada. The bigger members include outdoor clothing company Patagonia and ice cream maker Ben & Jerry’s, a Unilever subsidiary.

In December, Brazilian cosmetics company Natura became the first large publicly traded B Corp in the world, as well as the largest B Corp overall. Unilever CEO Paul Polman told Guardian Sustainable Business at the World Economic Forum in Davos this year that he was strongly considering doing the same, although he was intimidated by the logistical and jurisdictional challenges of gathering all the relevant data together.

With such a burgeoning number of businesses joining the fold, B Corp recently decided to highlight those certified enterprises that have earned an overall score in the top 10% of all Certified B Corporations on the B Impact Assessment survey.

This best of the best list involves a number of compelling Canadian companies including Oliberté, a premium leather goods company that “sustainably sources its materials from and manufactures in Africa to create pathways out of poverty.” In obtaining a score of 138, Oliberté is marking a small milestone in the evolution of capitalism.