It’s one of the country’s great workplace safety mysteries: Why is someone working in the west more likely to get injured on the job than someone in the east?

According to the Institute for Work and Health (IWH), workers in Alberta, British Columbia and Saskatchewan have a 30 per cent to 45 per cent higher risk of getting hurt at work compared to workers in Ontario.

The good news is that time-loss injury claims have been steadily falling across Canada for the past 20 years. There were 46 per cent fewer claims in 2012 compared to 1992, according to data from the Association of Workers’ Compensation Boards of Canada (AWCBC).

But the decline has been much less dramatic in the west than in the east. Claim numbers have fallen by just 7 per cent in Saskatchewan, 7.9 per cent in Manitoba and 13.6 per cent in Alberta since 1992. Ontario, on the other had, has seen a 59.5 per cent drop in claims over the same period. Quebec has seen a 53.3 per cent decline, while New Brunswick has seen claims fall by 60 per cent. PEI, Nova Scotia, and Newfoundland also exceeded the national average decline.

Common sense tells us that oil and gas, forestry and farming jobs all carry high risks, and these are the kinds of jobs associated with western provinces. They also tend to be male-dominated, and it’s known that 70 per cent of time-loss injury claims come from men. Ontario, by comparison, has lost a great deal of manufacturing and seen a dramatic increase in service-related occupations considered lower risk by comparison. 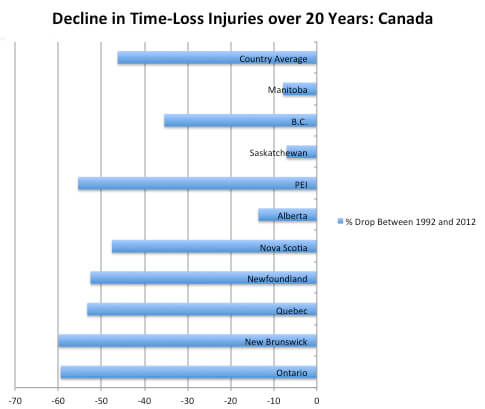 In a 2013 study, IWH looked at personal factors, such as age and gender, as well as work characteristics in each region, such as industry type and the kinds of jobs being done. Researchers also considered the socioeconomic status of each region.

The institute adjusted for all of these factors and still couldn’t find a clear explanation for the regional difference. It raises “the possibility that broader elements, such as a jurisdiction’s economic or health and safety policies, act as risk factors,” said researcher Sara Morassaei, lead author on the IWH study.

IWH didn’t want to speculate further about the reasons behind such a regional disparity, and the AWCBC told Corporate Knights it only collects and publishes the data. “Workers compensation boards don’t want to talk about it,” said Peter Sturm, a workplace safety consultant and former president of the Canadian Society of Safety Engineering. “But if you don’t try to figure out what the data means, how do you come up with solutions?

Norm Keith, a lawyer with Fasken Martineau who specializes in workplace health and safety, said one explanation could relate to how each jurisdiction prosecutes employers that violate health and safety regulations.

“Ontario prosecutes much more aggressively than the west, especially B.C., so perhaps the fear of prosecution and high fines is having a deterrent effect,” Keith said. “I don’t like that explanation conceptually because there is no proof or study on it that I’ve seen, but it’s plausible.”

Better enforcement in Ontario and other eastern provinces could also be part of the answer, said Jeff Thorne, manager of training and consulting at London, Ontario-based Occupational Safety Group. Western provinces have similar workplace safety programs, he said, but “we have one of the largest enforcing bodies here in Ontario.”

Another more contentious theory is that more workers in eastern provinces aren’t reporting their injuries, either because they’re being discouraged from doing so or because they get less money by going on workers’ compensation.

Company managers, who often have bonuses tied to the number of injury claims, may temporarily put an injured worker in a less physical job to avoid a claim or limit the length of time a person is off work because of an injury. This benefits companies, which in Ontario can get a rebate on the insurance premiums they pay if the cost of claims in a year is below average.

Is it happening? “We certainly hear those stories on a regular basis,” said Thorne. “It assists the employer, who doesn’t have to go through the compensation process, and depending on how it is positioned to the worker, it may be beneficial to them, too.

But Keith warned there’s no evidence to back up that explanation. “I would be reluctant to float that theory,” he said, pointing out that employees and employers who don’t report injuries are breaking the law.

It has also been suggested that increased reliance on temporary foreign workers in, for example, the Saskatchewan and Alberta oil and gas industries may partially explain the lower rate of decline of time-loss injuries in those provinces.

Language barriers and a lack of understanding of Canadian safety standards not only put these temporary workers at risk, but other workers as well. Canada’s temporary foreign workers program “has serious implications for workplace safety,” said Gil McGowan, president of the Alberta Federation of Labour, in a statement released in September. “Without the proper skills and training, these workers are putting themselves and others at risk of serious injury or even death.”

In Ontario, meanwhile, there have been some dramatic drops in specific sectors that raise unanswered questions. Why, for example, was there an 87 per cent drop in time-loss injury claims in government services between 2010 and 2012, or a 68 per cent drop in educational services and 63 per cent drop among communications and utility companies over the same three years?

Keith said there is a “huge” need for better analytics and processing of the data. “It’s kind of pathetic,” he said. “There’s lots that can be done that doesn’t break the bank and it’s just not being done.”

(This story is the third in a series of articles on workplace safety that will appear on corporateknights.com during October, in partnership with and with funding support from the Canadian Society of Safety Engineering and the Center for Safety and Health Sustainability. Visit our Workplace Safety landing page to follow the series.)