Walk through any airport terminal, train station, shopping mail, or main intersection in Switzerland and rarely a second goes by when you’re not exposed to evidence of chocolate.

Lindt. Nestlé. Toblerone. Villars. Frey. Favarger. Cailler. The list goes on. And in places such as Geneva, the chocolate isn’t just for eating. Several spas in the country let clients bathe in a bubbling tub of liquid chocolate, no doubt a sold out offering on Valentine’s Day.

Chocolate, quite simply, is at the heart of Switzerland’s international brand and reputation as a global commodities hub. The Swiss are the biggest per-capita chocolate eaters in the world, with each citizen consuming 12 kilograms of the treat annually – about the weight of a large cocker spaniel, and nearly twice as much as the average Canadian. 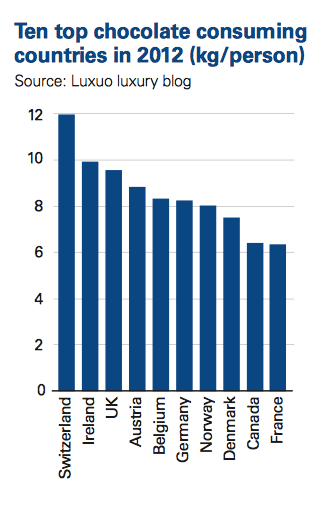 But the luxurious days of bathing in a plentiful pool of chocolate may be coming to an end if predictions of a global cocoa supply shortage within the next five years come true. Last fall, Swiss-based cocoa manufacturer Barry Callebaut warned of the potential crisis – a big deal, considering the company processes nearly a quarter of the world’s cocoa beans. Company chief executive Juergen Steinemann called it a “serious concern” for the $117 billion (U.S.) global industry.

Two years earlier, the world’s largest chocolate maker, Mars, sparked anxiety among chocolate lovers when it said the industry could face a million-tonne shortage of cocoa by 2020. It also drew attention to the economic and environmental pressures faced by cocoa farmers at a time when demand for chocolate, particularly in developing countries such as China, India and Russia, is expected to grow by 30 per cent within the same timeframe. “It’s just not sustainable,” the U.K. president of Mars said.

To be clear, it’s not like Valentine’s Day will come to a sobbing halt, or for that matter Easter – which by the way is the top-selling chocolate occasion. It means that as demand rises and supply struggles to keep up, the amount and quality of cocoa in what we call chocolate will decline, replaced by imitation fillers. Alternatively, the price of higher-quality chocolate is expected to rise sharply.

A need for sustainable approaches

Switzerland is an interesting case study when it comes to rethinking the way the chocolate industry operates and interacts with cocoa suppliers.

Côte d’Ivoire and Ghana are the biggest cocoa suppliers in the world, representing 36 per cent and 22 per cent of global supply, respectively. They’re also the two biggest suppliers to Switzerland.

“Both face production bottlenecks that threaten cocoa exports in the coming years,” according to the Earth Security Index 2015, a report put out by London-based consultancy Earth Security Group.

There are many reasons for the bottlenecks in Côte d’Ivoire and Ghana. As Earth Security’s report points out, cocoa trees planted a quarter century ago have hit their production peaks and the land they grow on is no longer as fertile as it once was. “Without large-scale rehabilitation of land and trees production is likely to drop.”

Climate change is also taking its toll, and will continue to do so. Rising temperatures and changing rainfall patterns are affecting the availability of suitable land for growing cocoa trees and increasing the risk of disease. 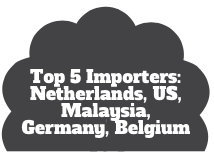 The bottom line: it’s hard these days to farm cocoa, let alone eke out a living, with roughly 90 per cent of world supply grown on relatively small, family-owned plots. Most farmers are operating well below the line of poverty, forcing them to rely on child labour to lower costs. Alternatively, they abandon cocoa altogether in pursuit of more profitable crops, such as rubber or palm oil.

“Chronic poverty and poor labour conditions are driving an exodus from cocoa farming, just as a new generation of farmers must take the reins of production,” the report states.

The industry hasn’t been blind to these problems. In fact, it has taken some important actions. The largest 13 cocoa-dependent companies have invested hundreds of millions of dollars on sustainability programs, and through an initiative called CocoaAction, have worked with the World Cocoa Foundation to support thousands of farmers. 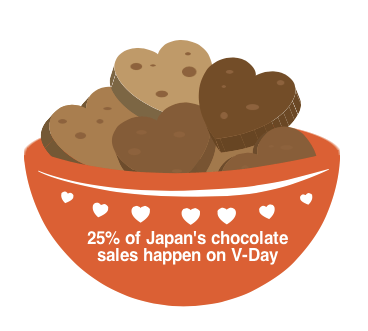 But efforts so far don’t go far enough. This has many industry observers calling for more innovative approaches, which some smaller and newer chocolate makers are proving can work. London-based Divine Chocolate, for example, has emerged as a successful fair-trade chocolate company that shares ownership directly with the cocoa farmers it relies on.

The company was founded in 1998 as a partnership between Twin Trading, a U.K. fair trade company, and the Kuapa Kokoo cocoa farmer cooperative in Ghana. Cooperative members collectively owns 45 per cent of Divine Chocolate and, on top of being suppliers also get a dividend from the company’s profits. The company, which counts Body Shop among its investors, also devotes 2 per cent of its revenues to farmer education.

Earth Security says this kind of increased integration with farmers is proving so far to be a sustainable model that’s driving positive change in the industry. “However, in order to reach the needed scale, similar innovations must be replicated by the larger players in the industry.”

The value of certification

For now, the approach to sustainable cocoa production – and specifically, to combat forced and child labour – has been through compliance with sustainability standards, which have experienced strong growth over the past few years. There are four major standards that dominate the cocoa market: 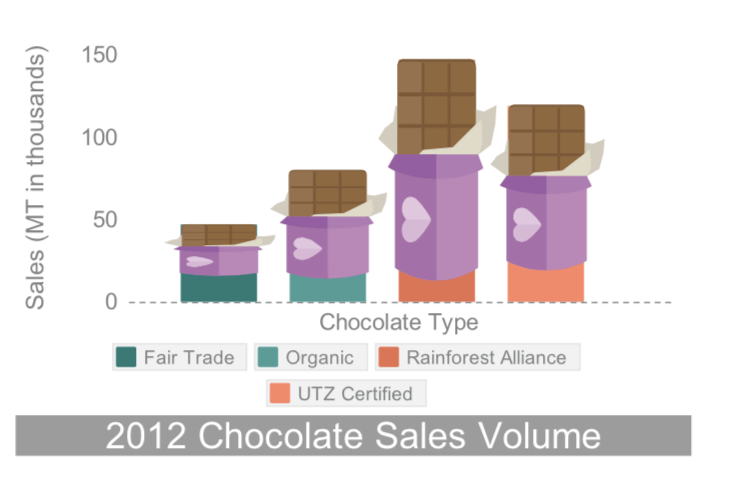 These voluntary sustainability standards first began to appear in the late 1980s, but started to build some serious momentum in the late 1990s. Growth is expected to build, given that major chocolate companies Hershey’s, Ferrero and Mars, together representing nearly half of the confectionary market, have said they will source all of their cocoa supply sustainably by 2020. Which standard they will adhere to, however, is unclear.

To date, the most successful has been the UTZ Certified standard, which represents nearly 15 per cent of the share of global cocoa production, followed by the Rainforest Alliance certification at about 10 per cent. Organic and Fairtrade are far less popular, both sitting at 3 per cent of global production. This is likely because of the higher premium they fetch for farmers. For example, the premium for UTZ Certified cocoa is around 5 per cent, compared to about 18 per cent for organic cocoa.

That said, both organic and Fairtrade cocoa have experienced rapid growth over the past few years. The International Institute for Sustainable Development predicts that Fairtrade certification will continue along this trend, “particularly in light of public commitments by Cadbury and Hershey’s to source Fairtrade cocoa in the coming years, which will likely lead to reductions in the gap between supply and demand in the coming decade,” according to its State of Sustainability Initiatives Review 2014.

Certification may not be a panacea, but industry watchers say it’s a laudable start, perhaps paving the way to more creative business models like that pioneered by Divine Chocolate. Other attempts at addressing a feared cocoa shortage involve genetically modifying cocoa plants to grow in harsher conditions, resist pests and disease and increase their yield.

This may be part of the answer, but beyond concerns about the safety and health issues related to GMO products, the bigger worry for chocolate makers and lovers is that these new super-variety of plants will produce inferior tasting chocolate, the same way GMO strawberries – while larger and more robust – tend to be flavourless and lacking in the rich redness of wild strawberries.

As you savour chocolate treats this Valentine’s Day, ask yourself: How much flavor are you willing to sacrifice? And how much more would you be willing to pay for sustainably grown cocoa and responsibly produced chocolate to satisfy your chocolate cravings?

One thing is for sure: bathing in chocolate in Geneva is going to get mighty expensive.

Diet transformation would free up an area larger than the European Union, says new study

Animal agriculture is both a major contributor to the climate crisis and a victim of it.

Big Meat has been dabbling in the plant protein market. So why is the sector undermining

Beyond wars and pandemics, the climate crisis is the greatest risk to food supply chains

Solutions exist to reduce emissions and increase sequestration in agriculture, if more companies step up to

When it comes to food production, ‘Does it scale?’ is often the wrong question