“Canada’s automotive industry is nearing the tipping point,” says KPMG partner Peter Hatges. But with consumers admitting they’re concerned about “range” issues and the limited availability of charging stations, Hatges says the onus lies with manufacturers and governments “to shift gears not only to meet the expected surge in EV sales, but to invest heavily in the necessary infrastructure.”

Manufacturers are accelerating into the curve, with bold production commitments and technology breakthroughs that kindle consumer confidence.

General Motors got the jump on Ottawa in January by announcing it will phase out all gas-powered vehicles by 2035. GM is spending an additional US$27 billion to ensure EVs make up 40% of its models by the end of 2025. The auto giant also promised to power its U.S. sites with 100% renewable energy by 2030 – five years ahead of schedule.

By trading in its century-old internal-combustion technologies for EVs, GM is gambling that it can transfer its market leadership to an all-new industry. But some analysts argue GM had no choice. David Keith, professor at MIT Sloan School of Management, asked Quartz News, “Do you want to be the company that bends metal in a very low-margin business or a technology business with recurring revenue and a blue-sky valuation?”

The race is on. In March, Volvo one-upped GM by vowing to phase out production of all gas-powered vehicles – including hybrids – by 2030.

“There is no long-term future for cars with an internal combustion engine,” said Volvo’s chief technology officer.

But the big headlines belong to Israeli lithium-ion battery company StoreDot, developer of the world’s first EV fast-charging system. It can “fill your tank” in five minutes – versus the current minimum of half an hour. StoreDot’s breakthrough comes from replacing the electron bottleneck in most car batteries – their graphite electrodes – with germanium-based semiconductor nanoparticles that can absorb much faster flows. Eventually, the company hopes to use silicon, which will bring costs down to match those of today’s lithium-ion batteries.

StoreDot, whose investors include Daimler, BP and Samsung, has already produced 1,000 batteries, which were sent to carmakers for testing. The World Economic Forum is a fan, declaring that StoreDot’s technology “could transform electric vehicle uptake by tackling range anxiety.” 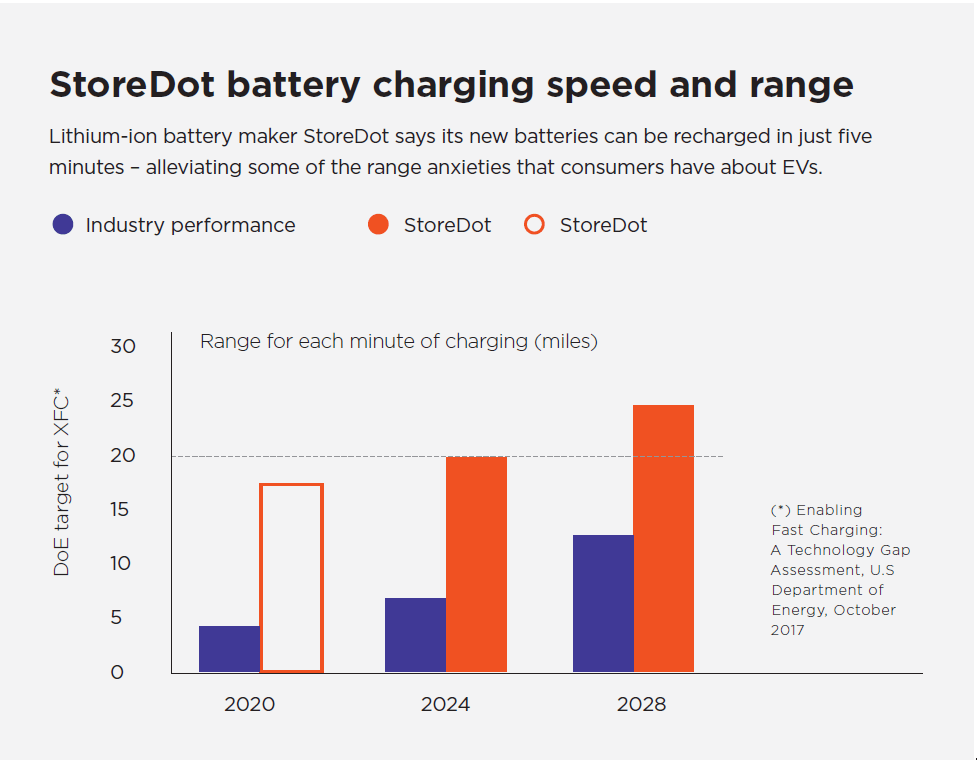 Other companies developing fast-charging batteries include Tesla, Enevate, EC Power and Sila Nanotechnologies. EC Power founder Chao-Yang Wang told The Guardian he thinks fast-charging batteries will hit the mass market in three years: “They will not be more expensive; in fact, they allow automakers to downsize the onboard battery while still eliminating range anxiety, thereby dramatically cutting down the vehicle battery cost.”

Want to buy Canadian? Three global automakers have announced big EV investments in Ontario. Ford will spend $1.2 billion to begin building five battery-powered models in Oakville, while General Motors will invest nearly $1 billion to produce electric commercial vans in Ingersoll. Fiat Chrysler has said it will invest up to $1.5 billion to begin EV production in Windsor.

Change can happen faster than we think – especially when it’s been delayed too long. KPMG concluded its recent report with this advice to people who rely on the traditional auto industry for their living: “Don’t just brace for change. Actively seek it to avoid being left behind.”

Rick Spence is a business writer, speaker and consultant in Toronto specializing in entrepreneurship, innovation and growth. He is also a senior editor at Corporate Knights.
Share this

If there’s one company that’s been the 21st century’s poster child for corporate citizenship, it’s Anglo-Dutch

From the Quakers outlawing the buying and selling of humans to the U.K. government buying green