Pharmaceutical giants have never shied away from the chance to make large profits from the sale of their medicines. But what if there was a way to marry corporate and social goals – to delight shareholders and tackle the most pressing global public health epidemics?

An initiative called the Health Impact Fund (HIF) has its eyes set on making medicines affordable and available to all. Supported by leading health scientists, Nobel-prize winning researchers and even former Canadian prime minister Paul Martin, it proposes a system that incentivizes pharmaceutical companies to research and develop drugs for neglected diseases and provides financial rewards to those that significantly reduce the global burden of disease.

“There are inadequate incentives for firms to engage in research and development of new products that are focused on the needs of poor people,” said Aidan Hollis, president of the fund and professor of health economics at the University of Calgary. “There is plenty of money put into drugs for cancer and Alzheimer’s, but in other areas … there is simply not very much commercial money put into the mix.”

The brainchild of Hollis and eminent Yale moral philosopher Thomas Pogge, the HIF takes aim at the so-called 10/90 gap – only 10 per cent of global health care resources are spent on developing countries where 90 per cent of preventable diseases occur.

Now, the team is setting up a $100 million (U.S.) pilot project with the ultimate goal of developing a $6 billion fund that would support the development of 25 to 30 new life-saving drugs.

HIF’s backers believe their approach would make health care more equitable and help end the scourge of rampant, curable diseases, all towards hitting the UN Sustainable Development Goal targets of eradicating AIDS, tuberculosis and malaria, and combating hepatitis and other communicable diseases by 2030.

But big challenges remain. A new Lancet study finds that HIV infections are on the rise in 74 countries. More than 6,000 young girls in southern Africa are infected with HIV every week. In Vietnam, 17,000 people a year die from tuberculosis. And in India, 1,000 people, mostly children, die from malaria each year.

One major obstacle to reaching the poor is the high cost of drugs. 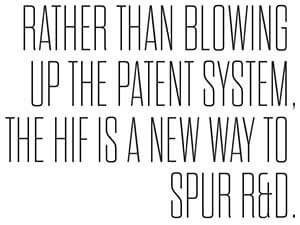 A powerful new antiviral drug to treat hepatitis C is being marketed as Sovaldi by the pharmaceutical company Gilead, but was introduced in the U.S. with a steep price tag of $84,000 for a 12-week treatment course, according to a report by Doctors Without Borders. Gilead has enabled access through generic licensing permits in over 100 low-income countries. But 38 middle-income countries, where 70 per cent of people with hepatitis C live, are excluded. Patients who cannot afford the $2,000 to $12,000 treatments will have to go without care.

But the cost of producing a new drug is a massive undertaking. The most recent estimate is $1.4 billion to get a drug to market. And that just covers R&D, as each drug also incurs testing costs for regulatory approval and legal fees to file patents in different countries, as well as administrative, manufacturing and marketing costs, according to Hollis. Those costs are used to justify exorbitant drug prices, since companies must recover their investments.

At least one firm sees wisdom in finding innovative ways to finance R&D for neglected diseases.

Janssen, the pharmaceutical companies of Johnson & Johnson, is supporting HIF’s pilot study with Johns Hopkins University and a hospital in Mumbai aiming to demonstrate the feasibility of measuring outcomes of new tuberculosis drugs. Those outcomes are difficult to measure because treatments for multi-drug-resistant tuberculosis, or MDR TB, are highly complex, requiring four to eight different drugs, thousands of pills and injections for up to 24 months. Janssen’s drug Sirturo – the first new drug developed for MDR TB in 40 years – is available for the study.

“We need to move to an outcome-based approach, versus activity-based, and that means collaboration at scale with shared and transparent goals,” said Adrian Thomas, vice president for global market access, commercial strategy operations and global public health at Janssen. “That is a challenge because it really requires a different way of thinking.”

Rather than blowing up the patent system, the HIF is a new way to spur R&D. “The HIF is a kind of bypass,” explained Pogge. “It opens a second road through which pharmaceutical innovators can be rewarded and patients can get access to drugs.”

That is because the fund would preserve the patent system, which promotes innovation by offering market exclusivity for new drugs for specified periods. A firm could still register a new drug on the patent track and set its price or it could provide its medicine to the poor at a non-profit price and reap lucrative rewards according to the drug’s health impact.

But not all are convinced that firms deserve such pay-for-performance incentives. Pharmaceutical companies already enjoy intellectual property rights that favour their private interests over citizens’ health needs, according to Burcu Kilic, legal and policy director at the Global Access to Medicines Program at Public Citizen, a non-profit think tank.

“The biggest problem is that we have these patent monopolies and pharma companies are using their lobbying power to push for higher and higher [intellectual property protection] through trade agreements,” said Kilic. “They are crying crocodiles … like ‘We need incentives.’”

She also argues that pharmaceutical companies already benefit from publicly-funded basic research by universities and the National Institutes of Health in the U.S., where there is also an access to affordable medicines problem.

Still, companies believe that R&D financing needs are so large that many innovative approaches are welcome.

“We have to see a continual stream of activity in basic R&D to be able to identify those new drugs and technologies that may make a difference 10 years later,” said Jami Taylor, Janssen’s senior director of global access policy.

HIF’s founders believe they have found a practical middle ground. “This band-aid fix doesn’t give us the ideal system but it gives us something that works a lot better than the status quo,” said Pogge.

And it’s a cause they will fight for in the days ahead.

The HIF plans on holding an international donors conference for the mini-HIF at the World Bank in 2017. This fall, Pogge will pitch the fund to foundations and the Indian and German governments. The Germans have already given preliminary support with a parliamentary motion to fund the initiative introduced by the Social Democratic Party.

“My dream is that these two governments can bring along a number of other governments, in the German case in the EU and in the Indian case, countries like Brazil and South Africa,” said Pogge. “We are trying our best to make this happen.”

Where do you see yourself in five years?

Placing sustainability at the core of your business strategy has never made more sense. Focusing on

Five notable centres and institutes: The Center for the Advancement of Social Entrepreneurship (CASE) Fuqua School

The millennial is the message

Millennials may be forgiven for not knowing Marshall McLuhan. But for insight as to why millennials