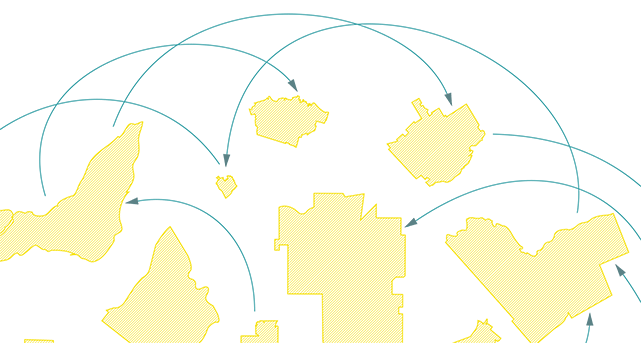 If the concept of a sustainable city sounds like a paradox, that’s because it is, according to physicist Geoffrey West.

Ironically, because of their urban “metabolism,” cities require only 85 per cent of the resources necessary to double in size, and they’re more energy efficient than rural communities.

A un-habitat report State of the World’s Cities 2010/2011 found that cities’ density and economies of scale provide more benefits to the environment than rural living— and could even reverse the impact of climate change by reducing per capita emissions.

This seems counterintuitive to the agrarian revolutionary who believes a return to rural communities is a solution to climate change. Urban living may increase our problematic reliance on destructive factory farming, but increased worldwide migration to cities is helping curb population growth because there is no need for large families for labour.

“When villagers migrate to the city, their family size drops, on average, by at least one child per family, often below the steady population rate of 2.1 children,” writes Doug Saunders in his recent book, Arrival City. “Without massive rural-to-urban migration, the world’s population would be growing at a far faster pace.”

As more people move to cities to find work, even though their family size shrinks, consumption rears its head. More people means a clamour for more food, energy, and products. According to West, the only way to keep the unsustainable urban machine going is the innovation produced by cities that constantly finds new resources to exploit.

The upshot is if we want to live in a sustainable world, we’ll need bigger cities, and more of them. As a physicist who applied his training to the study of urban environments, West believes we need more megalopolises.

But as we found in the fifth annual Corporate Knights Sustainable Cities ranking, not all cities are created equal.

We studied 28 indicators of sustainability in five categories—ecological integrity, economic security, infrastructure and built environment, governance and empowerment, and social well-being. Seventeen Canadian cities were surveyed, giving us a picture of the country’s urban sustainability.

Toronto, Vancouver, and Victoria won top honours in our Big, Medium, and Small city categories respectively. But many other cities boasted environmental programs that made them stand out, such as Edmonton and Whistler. While Whistler is not included in our ranking, the city deserves honourable mention for promising initiatives (see pg. 26).

Evaluating the complex 21st-century city is never easy. This is something University of Toronto civil engineering professor Christopher Kennedy knows all too well. Kennedy led a groundbreaking ranking of the greenhouse gas emissions (GHG) of ten global cities in 2009 called Greenhouse Gas Emissions from Global Cities. To help account for a city’s use of energy, Kennedy employs the idea of its urban metabolism, a framework that sees the modern metropolis as a kind of organism or ecosystem with flows of water, nutrients, and waste.

Gathering data from world municipalities, which are only beginning to request figures from energy companies, turned out to be a big challenge, he says. There are so many factors involved that it would be hard for anyone to simply say, “Hey, my city is better.”

For example, Toronto was the only Canadian city included in Greenhouse Gas Emissions from Global Cities, and it performed well against its North American counterparts, but only average overall because its cold climate drives up the use of its major source of emissions—natural gas.

“When you look at a city’s metabolism, there are details that become apparent that you miss on a national level,” he says. “Many of the strategies for reducing environmental pollution or reducing greenhouse gas emissions more broadly come down to actions that have to be taken at some city scale, whether that’s at the metropolitan, municipal, or corporate level.”

Local programs, in other words, are the only way to have a national and global impact on carbon emissions. And our survey shows that Canadian cities are constantly seeking out new initiatives.

Vancouver stands out for its competitive commitment to sustainability, with its Greenest City Action Team initiative aiming to transform the city into the world’s greenest city by 2020. Victoria topped the Small City category, and matched Vancouver for highest numbers by developing its Victoria Sustainability Framework, making sustainability a guiding principle of all city business. For more on the winning cities, see page 29.

But we’re not just praising our top cities. Saint John deserves applause for its Green Thermal Utility plan, a multi-building project that would make use of renewable energy sources, such as waste energy from Irving Pulp and Paper. Looking to the future, with two phases to be completed in 2014 and 2017 respectively, the project aims to reduce emissions by over 16,000 tons of carbon dioxide.

Edmonton stands out in the biodiversity field. They joined the international Cities Biodiversity Index in 2010 and city staff is proactively monitoring hazard trees and invasive species. Montréal and Québec score points for retrofitting old buildings to make them accessible. They also stand out for developing “ecodistricts,” which aim to sponsor sustainable development within neighbourhoods. Considering Montréal’s 19 boroughs with separate councils and mayors, this is important.

Ideally all Canadian cities would have ecodistricts, and with the support of Partners for Climate Protection they just might. The Partners are a network that unites 211 municipalities (and counting), works on local sustainability initiatives and connects cities with funding from the Federation of Canadian Municipalities’ Green Municipal Fund.

Many city governments have positive sustainability initiatives, but municipal elections can complicate matters, to say the least.

Toronto’s new Mayor Rob Ford has proposed a subway scheme that Toronto Environmental Alliance (TEA) suggests would cost three times as much and serve half as many riders as former mayor David Miller’s Transit City. TEA’s findings stem from the Pembina Institute that states light rail would reduce carbon dioxide emissions by 200,000 tonnes by 2031, compared with only 75,000 for subways. The Globe and Mail questioned whether the studies exaggerated Transit City’s benefits, but acknowledged the subway scheme was a step backwards.

Meanwhile, in a giant leap forward, Calgary and Hamilton have elected more progressive mayors. Traditionally conservative Calgary elected Naheed Nenshi, a Harvard grad whose platform was based on limiting urban sprawl and environmental protection. Likewise, Hamilton’s new mayor, Bob Bratina, has maintained the reputation he gained as a city councillor for supporting urban core development by increasing downtown density. These developments leave many people asking if today’s underdogs could leave Toronto behind next year?

With so much at stake, should we be waiting for government to lead the way on sustainability? Our cities are taking initiatives to explore renewable energy and sustainability frameworks that are far beyond Canada’s anemic national commitments. Yet the uncertainty over Transit City is a good example of how even well-intentioned, longterm municipal projects are at the mercy of regime changes.

Indeed, Vancouver writer and consultant Sanjay Khanna, Corporate Knights’ choice representative for social well-being, believes that resilience in the face of environmental collapse begins not in council, but deep within the self.

Our cities will need all kinds of innovation—especially the unconventional sort—if they are to come up with solutions that will allow them to grow sustainably in the long term. Cities are our most environmentally- friendly places to dwell, as well as our biggest cause of rampant consumption and waste. But it doesn’t have to be that way. With dedication and implementation, Canada’s cities can help resolve the urban paradox and make our urban metabolisms healthy.