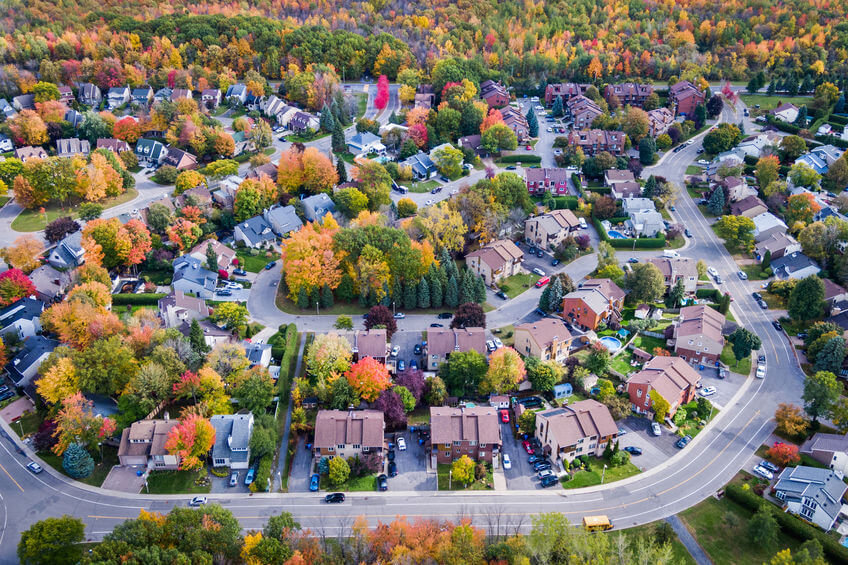 Aerial view of houses in the suburbs of Montreal.

The COVID-19 pandemic has helped many Canadians recognize how crucial it is to better prepare for future crises. With governments preparing to spend billions to get the economy moving again, Corporate Knights has launched a series of reports and online discussions on how best to combine economic-recovery initiatives with measures designed to reduce the impact of the likely next crisis: climate change.

Canada’s buildings currently contribute to 13% of our national greenhouse gas (GHG) emissions. Based on today’s economics, we can reduce those emissions by nearly 100 million tonnes simply by upgrading the energy efficiency of Canadian buildings with mass retrofits. A nationwide program to encourage “deep retrofitting” of Canada’s residential, commercial and industrial buildings would put thousands of Canadians back to work and stimulate the economy at a time when it most needs help.

It’s a huge logistical challenge, but the good news is that it’s no longer a technology challenge, and it doesn’t have to be a financing problem.

The challenge and the opportunities

The payback from building retrofits is just one example of how focusing on green recovery strategies following the COVID-19 pandemic can be a triple-win proposition. Investing in more sustainable processes, technologies and industries will not only fuel an economic rebound; it will create more efficient and resilient infrastructure, throughout the country, that will virtually pay for itself. Plus, it will develop Canadian knowledge and leadership in a growing industry, building deep expertise that Canadians can sell to the world.

To help inform the discussion, Corporate Knights has launched a seven-event series called The Canada We Want: Planning for a Green Recovery. These virtual roundtables, running from April 23 to June 3, include top decision-makers from government, industry, finance, labour and the not-for-profit sector. The moderator is economist and climate activist Diana Fox Carney.

Here are the highlights of the first session, on how to create a “green renovation wave.”

“The window of what is viable has shifted,” said Toby Heaps, the cofounder and president of Corporate Knights. “Just two months ago, the federal government was budgeting $70 billion to address the climate crisis over the next 10 years. Suddenly, it finds itself anteing up $71 billion for wage subsidies over just the next three months.”

The federal minister of environment and climate change, Jonathan Wilkinson, introduced the event, noting that as the pandemic abates, “rather than simply looking to rebuild the economy the way it was before the pandemic, we need to question our assumptions about future sustainability and our physical and economic security. We have to build the economy we want and need.”

Ralph Torrie, a long-time energy consultant and a partner in the firm of Torrie Smith Associates, co-authored an article that underpinned this discussion: “Building Back Better with a green renovation wave.” This virtual manifesto proposes a bold economic-development strategy based on retrofitting Canada’s building stock.

“Rather than simply looking to rebuild the economy the way it was before the pandemic, we need to question our assumptions about future sustainability and our physical and economic security.”

Torrie and co-author Céline Bak calculate that a 10-year program for thermally retrofitting and electrifying 60% of Canada’s dwellings would reduce GHG emissions by 45% and save Canadians fuel and electricity costs of $12.7 billion a year. The renovations would include conversion to heat pumps, controlled ventilation with heat recovery, insulating to achieve thermal leakage reductions of up to 70%, and a 20% improvement in lighting efficiency.

A global advisor on climate change and president of Analytica Advisors, Bak explained how forgivable loans could finance a renovation wave. “It will be a virtuous circle,” she said, comprising several players: the federal government, to provide loan guarantees; banks and credit unions, to underwrite the $40,000 renovation loans; the home or workplace owner, who would hire and pay the contractor; and an energy auditor to measure and verify the post-renovation benefits. The owner would submit this proof of energy savings to their bank, which would then be reimbursed by the government.

Sean Mullin, executive director of the Brookfield Institute for Innovation + Entrepreneurship, lent his voice to taking action. As a former advisor to the premier of Ontario, he urged government officials to seed recovery with additional long-term investments in climate issues. “There’s no reason Canadians couldn’t devote another 1% of GDP every year for the next 10 years to combating climate change,” he said. “We have the fiscal capacity to do that, even with all the borrowing we’re doing right now. We don’t have to be constrained by the fiscal anchors or mindsets of the pre-crisis environment.”

The audience of more than 300 industry and government representatives seemed to agree. In an online Zoom poll conducted during the session, 83% of participants supported Mullin’s call for an extra 1% budgetary investment in fighting the climate crisis. Only 5% disagreed.

Gordon Hicks, CEO of BGIS, Canada’s leading provider of real estate management services, including facilities management, confirmed there is huge demand for energy refits. “Given the rate at which technologies are advancing, we see opportunities in virtually every building that exists today,” he said. In fact, he believes Torrie underestimated the multiplier effect of this work: “For every dollar spent on energy efficiency, there should be a five times multiplier on GDP.”

“For every dollar spent on energy efficiency, there should be a five times multiplier on GDP.”

Canadian Green Building Association CEO Thomas Mueller supported the need for a coordinated program of energy retrofitting. “We talk about 50,000 to 60,000 buildings needing to be renovated between now and 2030 to reach a 30% reduction in carbon emissions. It’s a significant challenge, but it’s not insurmountable.” He endorsed the idea that government funding must be tied to achieving specific outcomes – and ensuring those outcomes are sustained over time.

As head of sustainable finance for BMO, Jonathan Hackett endorsed the idea of the federal government leading a renovation revolution through forgivable loans. But as the banks gain more experience with lending against energy savings, he sees the private sector taking on more of the financing. “We can push this to the point where it really becomes self-perpetuating… with small subsidies rather than complete forgiveness.”

Amidst the panel’s support for a green renovation-focused stimulus, some concerns were raised about governments alone running such a crucial program. Said RBC board director Andy Chisholm, “We need solutions that are not susceptible to a change in government or a change in political attitude.” He expressed hope that retrofit loans could become a standard “asset class” that could be assumed by mainstream lenders, like mortgages or auto loans. Chisholm suggested the government’s role should be to subsidize the program structure, not individual transactions.

“We need solutions that are not susceptible to a change in government or a change in political attitude.”

Derek Ballantyne, chair of the Canada Mortgage and Housing Corporation, supported the bankers’ call to create an asset class rather than a portfolio of projects. “Finding a financial architecture for this and how to get it kick-started is going to be the key around any federal involvement.” He suggested adding other incentives, such as insurance products, to attract private partners: “This kind of investment will not get done on government capital alone.”

Julia Langer, CEO of The Atmospheric Fund, chimed in as an expert commentator. Noting that the Greater Toronto Area–based fund has been successfully investing in retrofits for decades, she declared it’s time to shift the discussion from “what to do” to “how to do it.” “It is very complex,” Langer said. “We need on-the-ground mechanisms to bring projects together with capital, with suppliers – a local concierge service.” Her advice to the industry, government and lenders: “Don’t forget about that intermediation, which doesn’t [yet] exist in the country at a scale necessary to move the kind of dollars we’re talking about into play.”

Other questions were raised. Angela MacEwan, senior economist at the Canadian Union of Public Employees, when asked how Canada can ensure it has sufficient talent to conduct these renovations, said, “I think you have to work with building-trade unions. They provide a lot of training to their members.” She offered an example: the insulators’ union in British Columbia has added green training to its apprenticeship process.

She wasn’t keen about creating a blended public/private lending structure. “I don’t think this is the time for us to be making new instruments for people to profit off of the green transition. We need to be thinking about a just transition.”

Terri Lynn Morrison, director of strategic partnerships with Ottawa-based Indigenous Clean Energy, noted that Canada’s growing indigenous communities have extensive experience in clean energy, with more than 2,000 clean-energy and energy-efficiency projects now operational or nearly so. The not-for-profit’s new program, Bringing It Home, is focusing on scaling up development of community energy-efficiency projects to reduce costs and energy consumption, while creating jobs and improving quality of life.
Indigenous communities across Canada, says Morison, “are a powerful force for change as the country transitions into the clean-energy future.”

While prominent players from a wide range of organizations agreed there is merit in launching a green renovation wave, many issues still have to be ironed out. But if sector leaders can come together to solve these problems first, Mueller suggested, Canada has an opportunity to export its expertise in this area, especially given the global footprint of Canadian real estate investors and pension plans. “Canada is a leader in green building,” he said. “I think we’ve missed a tremendous opportunity to take advantage of that so far.”

Added Mueller, “No country has figured out so far how to do large-scale retrofits. So this whole model around scaling it up, finding a way to finance it, to execute it, creates a whole value chain – and that’s something other countries would be very interested in. I think it is a tremendous opportunity.”