“Our proposal is simple. It does not require civil disobedience, mass marches or expensive lawsuits. All it requires is that enough like-minded people seek out organic dairy products and grass-fed-and-finished beef. Most people can do this without busting their budgets by reducing their beef and dairy consumption to levels that are better for their health.”

First, they have to explain why. The number of cows out there is staggering – there are 93 million in America alone, which works out to roughly 55 million metric tonnes of cow.

Having fewer of them certainly would be a good thing for the environment. Eating a pound of beef, after all, has a greater climate impact than burning a gallon of gasoline. From the deforestation caused by the clearing of farmland for feed crops to the methane that comes from cow burps, livestock account for more than 14 per cent of anthropogenic GHGs. It also takes 3,280 litres of water to create a pound of grain-fed beef. 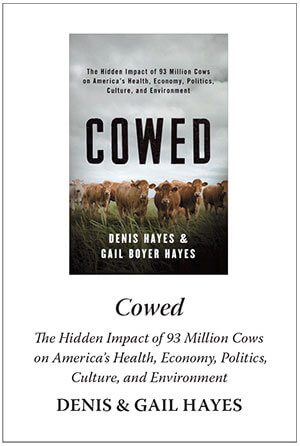 As Canadian author and scientist Vaclav Smil has noted, “few economic endeavors are as water-intensive as meat production in general and cattle feeding in particular.”

Cow factories – also known as concentrated animal feeding operations, or CAFOs – are environmental disasters. Cows eat a hundred pounds of feed per day and poop out almost as much. That waste is often pumped into sewage lagoons, which become giant lakes of contaminated water.

The crowded cows are also dosed with antibiotics that go right though them into the lagoons and into the water supply. In 2006, E. coli bacteria from cows got into several California vegetable farms, causing hundreds to get sick – and three actually died. Overall, the business is built on government subsidies and hidden costs as they relate to pollution, public health, loss of property value and environmental degradation.

Surprisingly, 42 per cent of cow meat is ground into hamburger, which opens up a whole new world of opportunity for adulteration and contamination. If it doesn’t sicken us quickly, it will kill us slowly, according to a Harvard study, which found that “people who eat more red meat have a significantly greater chance of dying from all causes.”

But really, the authors like cows, noting that “humans could survive without cows, but our lives would be poorer for it.” They visit contented cows on small farms and get to know them by name. It’s all very bucolic as we read about Tory and Taffy and Tufu and how they happily stroll up to their milking machines and nibble on organic treats. Author Vanessa Farquharson once called this “happy meat.”

In the Okanagan Valley, the cows are really happy. They get a litre of red wine each day. This produces more flavorful and better-textured meat. One dairy in Oregon actually supplies its cows with waterbeds, which cut down on conventional bedding costs and make the cows less stressed.

Could we all eat happy meat from happy cows? Sure, but industry and consumers would have to make some big changes. The authors propose a world where cows live in herds no larger than the farm has acreage for growing feed. That same land would have to sustainably absorb whatever cow poop is produced. “The end of feedlots will mean the end of cheap grocery store beef,” they write. “Beef will become a special food, served less often or in smaller portions… to be savored.”

They suggest that if we cut our consumption of meat and dairy in half, and only eat happy meat, “we can reduce pollution, global warming, medical costs, animal cruelty, loss of soil, loss of diversity, and germs resistant to antibiotics, while increasing the amount of land and water available for other uses.”

At first glance, I was put off by the title of John Taft’s new book, A